Aspiring presidential candidates have until August 8 to submit applications and need to physically be in DRC to do so.

AL JAZEERA – Opposition leader Moise Katumbi has lashed out at the government of the Democratic Republic of the Congo (DRC) after being barred from entering the country where he is expected to lodge his papers to participate in December’s long-delayed presidential election.

In a tweet posted on Friday afternoon, he said he would “fight” what he called an attempt to “withdraw from Congolese their right to real elections”.

“The regime prohibits my landing and barricades the border … My crime? Wanting to enter my country and lodge my candidacy,” he said.

The wealthy businessman, who has been living in self-imposed exile since 2016, had originally planned to fly from South Africa to Lubumbashi, the capital of Katanga province.

But the city’s mayor said on Thursday that Katumbi was refused entry, while the public prosecutor’s office said the opposition leader had been charged with “harming the state’s domestic and external security” and would be immediately arrested if he returned.

Katumbi, a former governor of Katanga province, was convicted in absentia in 2016 for alleged real estate fraud. He has also been accused of hiring mercenaries and possessing dual nationality, which is not permitted under DRC law.

He denies all charges and says they serve to block him for participating in the election.

On Friday, Katumbi told AFP news agency that he had arrived in the Zambian Copper Belt city of Ndola and was heading to the border post of Kasumbalesa.

A journalist with the French radio network RFI said he had arrived there. Videos posted online by his aides and others showed him on the Zambian side of the border, greeting hundreds of supporters from his car.

Salomon Della, a special adviser to Katumbi, posted on Twitter that after five hours they were “still blocked at the Zambian border crossing of Kasumbalesa.

“The DRC has become private property where access is prohibited according to the whims of its owner,” the tweet read. 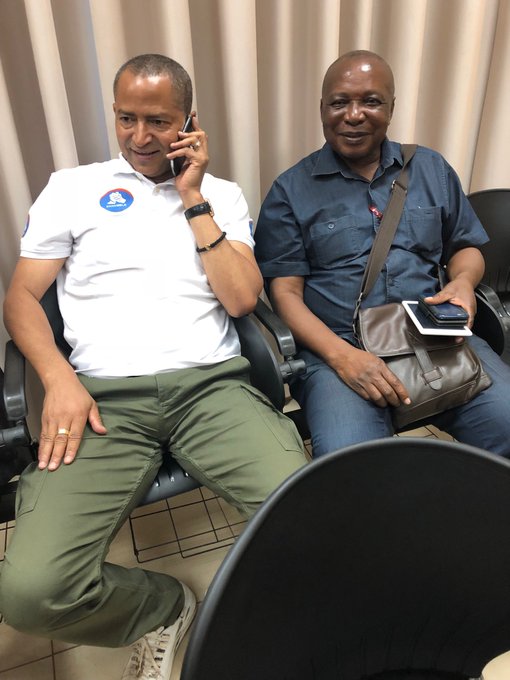 The DRC’s border authorities in Kinshasa said they were unable to confirm whether the crossing had been closed.

AFP reported that at least two police checkpoints were set up to screen access to Lubumbashi’s airport on Friday while the main road to Zambia had been blocked by a truck.

In March, 53-year-old Katumbi launched the Ensemble [Together] platform in South Africa to oppose President Joseph Kabila, who has been in power since 2001.

Kabila is technically barred by term limits from standing for re-election after his mandate formally ran out in December 2016. But he has not clearly stated whether he will step aside despite appeals from the international community for him to clearly state that he will not seek re-election.

Aspiring presidential candidates have until August 8 to submit their applications and need to physically be in the DRC in order to do so.

Another rival of Kabila, former rebel leader and former Vice President Jean-Pierre Bemba returned home to DRC on Wednesday, after 11 years in exile and prison. He officially launched his bid for the presidency on Thursday.

Speaking to Al Jazeera, Bemba, 55, said he wants a solution to be found for Katumbi’s situation to prevent tensions from escalating.

“I feel very sorry for Mr Katumbi who they don’t allow to come back to his own country,” he told Al Jazeera’s Catherine Soi in the capital, Kinshasa.

“Everybody should be able to participate in the election. Exclusion is not good for a country and for the unity of the country.”

In June, the International Criminal Court in The Hague, Netherlands, overturned a war crimes conviction of Bemba, ruling that he could not be held responsible for atrocities carried out by troops under his control in the neighbouring Central African Republic.

Upon returning to the DRC on Wednesday, Bemba was greeted by thousands of enthusiastic supporters, many of whom chanted slogans against Kabila.

The opposition leader urged opposition parties to work together and field a single presidential candidate.

“We have to be united because as you know we have just one run of the elections. If we want to win and bring new change in Congo, we need to be one,” he said.

“We don’t have the luxury to be many.”